December 29, 2020 — While 2020 has cast a shadow of uncertainty (the music industry being no exception), the Draugablíkk project – like many similarly ambitious dark Nordic and neofolk creative projects that have hunkered down to create new releases amidst rolling lockdowns – has continued to be prolific.

Verjaseiðr marks the second full-length release this year alone, and Draugablíkk may have only released their first songs a little over twelve months ago (the EÍN: Ættarbál EP landing on streaming sites on October 18, 2019), but already the world has changed immeasurably. Rather than steadfastly tread the path of traditional Nordic folk, the Swedish neofolk project has opted to experiment instead. By tapping into heathen folk’s amorphous relationship with heavy metal (explored also by Wardruna, Heilung, and Myrkur) across two starkly diverse releases.

Full-length debut NÍU: Blood of the Amali crafted a unique take on the folk metal formula by placing a much greater emphasis on the neofolk part of that synthesis than on metal — instead of playing with folk instruments to incorporate more tribal, metallic rhythms whilst keeping the overall structure of the folk framework.

“With Verjaseiðr, Draugablíkk manages to keep each track fresh, not relying on established norms and patterns to craft its own identity.”

But if Blood of the Amali was an exploration of classical saga and myth, Verjaseiðr is its spiritual counterpart. Released just in time for the winter equinox and packed with stirring, powerful folk instrumentation. Self-described as ‘embracing the dark, the unknown [and] connecting with the other-worldly’, the opening track ‘Fornrít: At Verja Sik’ has a sense of genuine, shamanic spiritualism with the heavy vocals evoking more recent Norse folk intonations.

Somewhat relying on East-Asian culture as a sonic touchstone (bringing bands like The Hu and Tengger Cavalry to mind) Draugablíkk successfully combines growls and snarls that would not be entirely out of place within metal’s own pantheon. Rhythmic string compositions craft a distinctive, likable tone most often associated with popular culture’s own relationship to Norse culture. Here, we can hear how Draugablíkk makes use of a wide palette of cultural and stylistic markers to craft distinctively unique and immersive soundscapes. 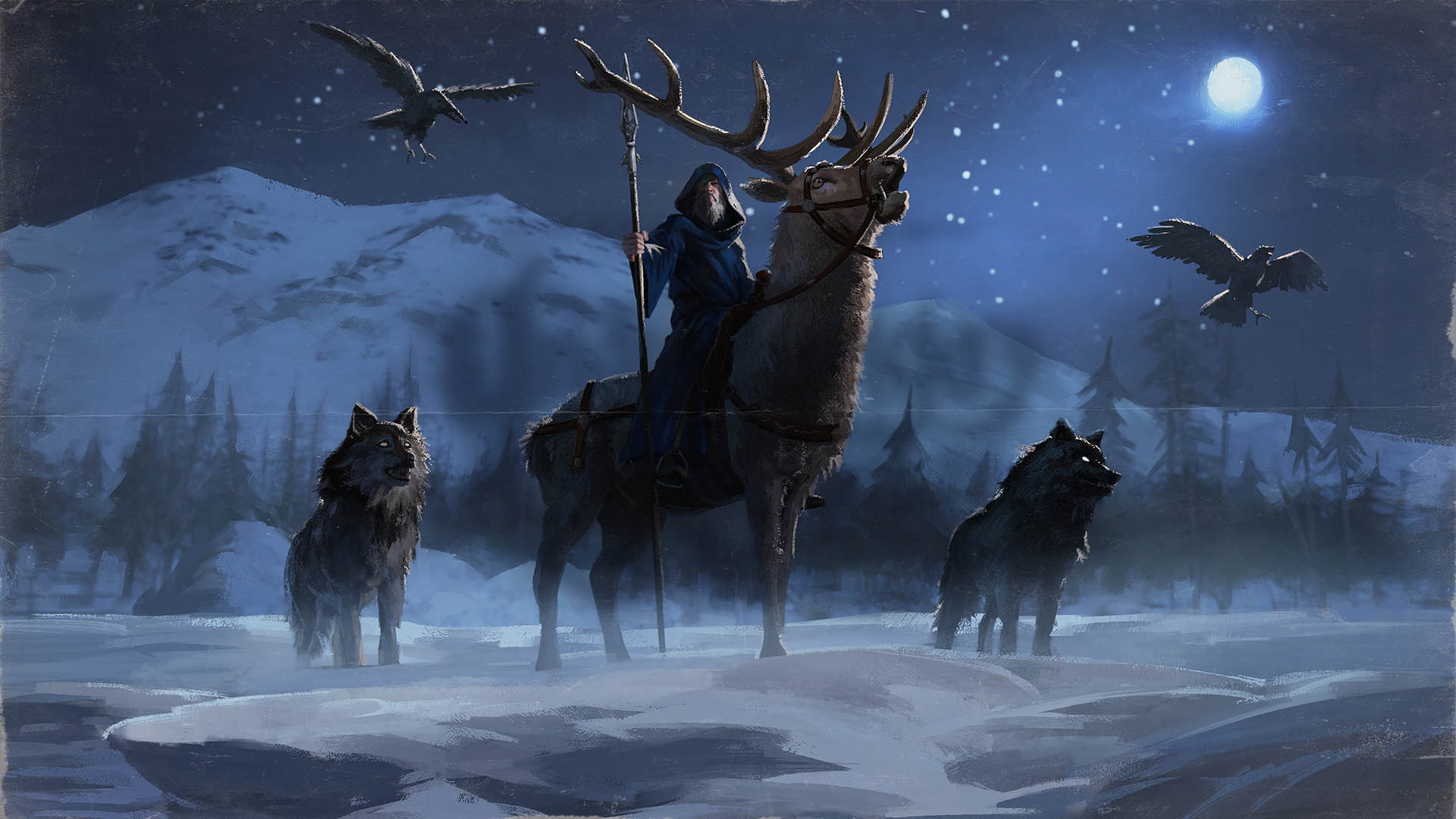 Draugablíkk do not often show themselves, with only a few “official” photo artworks available. In line with its enigmatic image, it instead relies on creating mythological art and historical paintings.

Atmospherics play an enormous part in how Verjaseiðr plays out, with no track dropping below the six-minute mark. Track durations allow for plenty of space for each composition to build, expand and ultimately mesmerize the listener. This also means each track is given free-roam to explore its own sonic and thematic boundaries, and ‘Arnlokkur’ feels predominantly centered around a tribal beat that almost serves as a hearth at the center of the song. Here, wind and string instruments drift alongside vocalizations that imbibe the project’s most spiritual elements, and in doing so carries the music into strange, otherworldly realms but never drifting too far from the earthy, warm drum-beat that remains a near-constant presence throughout the song’s six-and-a-half-minute runtime. Contrast this with its following song however and we move to a decidedly different sense of percussive, kinetic energy.

If ‘Arnlokkur’ is the movement of spirits against a static background, ‘Herjúlfamáni’ returns to the pace of Draugablikk’s previous release. Moving at a steady march, ‘Herjúlfamáni’ feature vocals that provide a solid presence amidst a sonic fog of indistinct strings and moody wolf howls. In this, we can begin to see how the project makes use of different paces and themes. Conjuring an adaptive soundtrack to different cultural backdrops and evoking different uses within everyday life.

Verjaseiðr keeps things fresh throughout, not relying too heavily on established norms and patterns to craft its own identity. The introduction of flute-like instrumentals and more energetic strings towards the song’s climax demonstrate the sheer scope of composition that goes into each song. All songs build up naturally whilst creating evocative moments that don’t detract from the individual sonic journey.

Verjaseiðr is out now on Legendo Music and streams now on all major music services. To support the band directly, consider purchasing their music on Bandcamp.

END_OF_DOCUMENT_TOKEN_TO_BE_REPLACED

March 28, 2022 — For many players out there, The Witcher 3: Wild Hunt is the pinnacle of video game RPGs. Based on the applauded literary works of Polish author Andrzej Sapkowski, there are few games in history that can attest to the success of this widely-regarded masterpiece series. With The Witcher 3: Wild Hunt next-gen update looking to come out this summer, this is one super-boosted upgrade you will not want to miss. END_OF_DOCUMENT_TOKEN_TO_BE_REPLACED