Swedish folk metal hero steps up the metal for ‘Ragnarök’ in two languages, has HULKOFF’s third solo album been worth waiting for?

November 20, 2021 — Considering the dominance of Scandinavian folk metal in the late 90s, it is amazing how folk metal has exploded and become a key factor in the ascension of global metal, with acts as diverse as The Hu, Bloodywood, and Nine Treasures flying the flag for how folk metal allows international artists to explore a love for the genre while championing their national and cultural identities.

Yet, while folk metal crosses the Steppes and bursts forth as far away as from the islands in Southeast Asia, the genre’s earliest breakthrough remains somewhat quiet on the Western front, the same champions as you may have found in 2001 [Korpiklaani, Ensiferum, etc.] are still prominent names in the art 20 years later.

Thank god then for HULKOFF, the Swedish master of bombast returning with his third solo record Ragnarök — a two-language epic worthy of the genre’s border crossing roots.

“Ragnarök is an impressive step in HULKOFF’s artistic ascent. The doubling down on heaviness and the honing of instrumentation that taps into modern metal make the sound uniquely fresh.”

To understand the shift in tone Ragnarök represents, one must first understand the musical history of Pär Hulkoff. Starting his career with industrial metal group Raubtier a little over a decade ago in 2009, Hulkoff (the man) since moved to the worlds of explosive folk metal and even country rock, bringing an unsurpassable sense of Swedish authenticity that made his output distinct (even as it drew comparisons with another Swedish metal icon, Sabaton.) 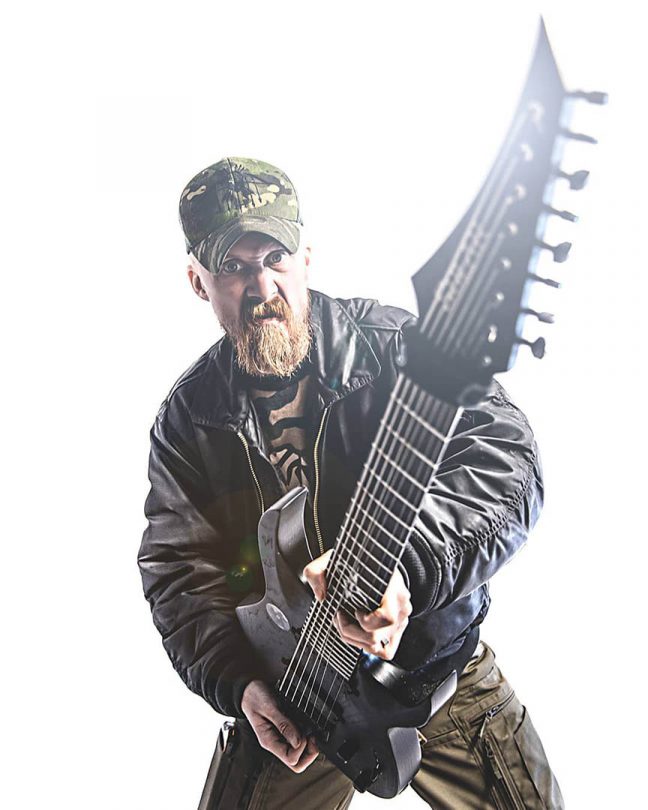 Ragnarök sees this musical pedigree explored to the fullest extent in Pär Hulkoff’s career yet, elements of past output as elements of industrial figure heavily in the metallic thunder of ‘Vápnum’ and ‘Ulfhednar’, while ‘Hekwos’ affixes a country knees-up to one of the most outright folk metal party songs on the record. ‘Holmgång’ on the other hand is as close to HULKOFF’s previous record Pansarfolk as the artist cares to get, before moving to heavier and more metallic-based territories for this third outing.

One of the most striking things about Ragnarök is just how heavy the record is in comparison to the HULKOFF’s first two outings. The guitar tones feel much more in keeping with the worlds of industrial and tech metal than they do the artist’s previous auditorium of fierce metal and folk — but while djent-like crunching guitars are ever-present, their employment in galloping passages (and, as on ‘Vápnum’, accompanied by more frenetic melodic leads) still keeps this in the same wheelhouse as past releases.

Considering Scandinavian folk metal has gone to great lengths to disassociate itself with the frivolity of the scene’s early years, this evolution makes perfect sense for an artist like HULKOFF who is steadily transcending borders and stepping up to the international stage. However, there is no need for fans of the HULKOFF-metal combo to feel disheartened, the music on Ragnarök provides a plethora of brilliant folk flourishes, many of which will force a heartfelt grin onto your face.

The end of an era?

Having in mind Ragnarök’s associations with the end times and the changing of eras, it is hard not to wonder if HULKOFF is making his own artistic statement with this third solo outing. While some elements of the first two albums still shine through, it is not difficult to imagine the man’s artistry moving forwards with more directly metallic influences, perhaps shifting away from folk metal and traditional instrumentation altogether?

If so, it represents an exciting realm of possibility for HULKOFF who continues to expand and evolve his arsenal of riffs. Even with Ragnarök’s shift, the record is epic and bombastic in a way that it could conceivably march on the fields of Europe and lead the way for a new lineage of Swedish heavy metal excellence. The sheer enormity of the choruses in the likes of ‘Till Valhall’ (“To Valhalla”) and ‘Sänd dina Korpar’ (“Send Me A Raven”) suggest there is plenty of musical ground for HULKOFF to explore.

So far as musical evolution goes, Ragnarök feels like an essential step in HULKOFF’s artistic ascent. Doubling down on the heaviness and really honing the instrumentation taps into modern metal’s interest in technical proficiency that in turn helps the artist not feel like a holdover from a scene the metal world has long since moved on from. Having that in mind, we will eagerly be awaiting the next album to hear the artistic direction that HULKOFF might be taking next.

Ragnarök is a thoroughly enjoyable and fascinating listen, the sound of Pär Hulkoff embracing his own musical heritage to make an honest artistic statement. The shades of Rammstein that shine through on songs like the title track are a tantalizing prospect for the future, perfectly aligned with HULKOFF’s own ear for epic bombast.

While the inclusion of strings feels subtler on Ragnarök than previous releases, their very existence is a testament to the grandeur and ambition that marks HULKOFF as an act to watch going into the 2020s.

END_OF_DOCUMENT_TOKEN_TO_BE_REPLACED

March 28, 2022 — For many players out there, The Witcher 3: Wild Hunt is the pinnacle of video game RPGs. Based on the applauded literary works of Polish author Andrzej Sapkowski, there are few games in history that can attest to the success of this widely-regarded masterpiece series. With The Witcher 3: Wild Hunt next-gen update looking to come out this summer, this is one super-boosted upgrade you will not want to miss. END_OF_DOCUMENT_TOKEN_TO_BE_REPLACED