The timeless spirit of Draugablíkk channels the ghosts of ancient battles between the Goths and Huns in a spacious, raw, and thrilling three-track EP.

June 5, 2021 — Enigmatic dark folk trio Draugablíkk has emerged from the shadows once again to deliver the first, atmospheric, half of their Wolves of Hyrkania EP.

At the core of this mythic musical outfit is the fusion of primal sounds, forgotten wisdom, and deeply buried history in a dynamic and often ritualistic fashion. This three-track release which is sub-titled ‘Aujum Unplugged’ delivers dramatic neofolk vibes and intensely deep yet beautiful singing, crafting a spacious but raw sound with second-half Wolves of Hyrkania (Gothunni Metal Cut) to follow on June 11. 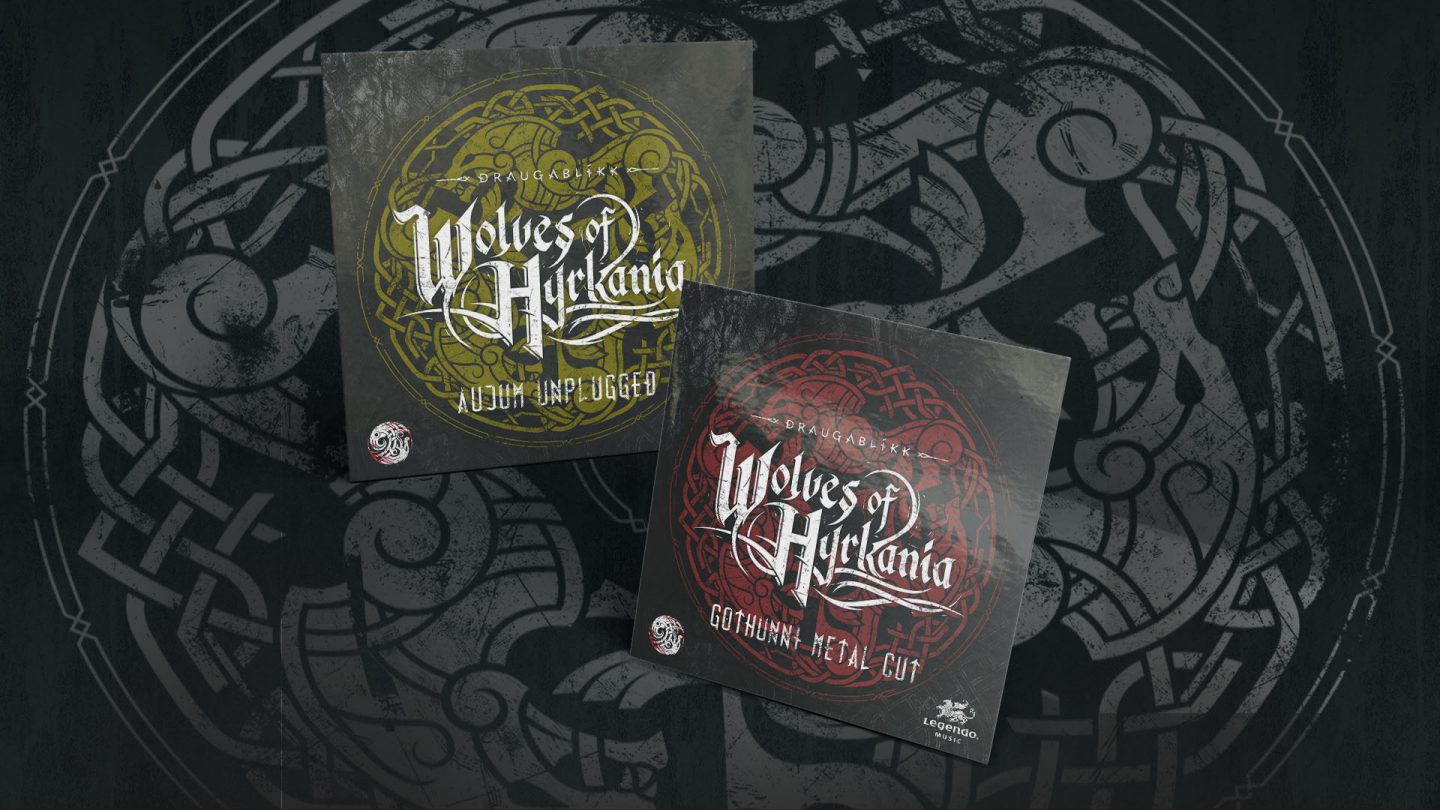 Draugablíkk is known for its authentic artistry and unique visual style. The Viking-style animal art developed for the covers of Wolves of Hyrkania looks impressively detailed and attractive.

Draugablíkk’s two-part concept EP is inspired by the tales and historical conflicts between the Goths and the Huns. Drawing inspiration from the storied past, including bits and pieces from the epic poem Beowulf, and far more from the Icelandic poem (Hlǫðsqviða English: The Battle of the Goths and Huns), the soundscapes of Draugablíkk’s latest release are woven effectively from the historic cultures of these two warring factions; With the Goths hailing from Scandinavia, Draugablíkk draws on Norse instrumentation with instruments like the talharpa, while the Huns, hailing from the Eurasian Steppes are represented by Eastern instruments such as the moorin khur (which is skillfully paired with the Norse talharpa, although you sometimes cannot tell them apart.)

“Draugablíkk succeeds in conjuring the sleeping ghosts of these ancient battles in a captivating release that stands strongly on its own as an evocative neofolk EP whilst inspiring eager anticipation of the upcoming metal cut.”

The history of these ancient tribes isn’t just a backdrop to aural and aesthetic elements for Draugablíkk on this short and potent release, but a tight narrative calling on the geography of historic clashes (the Aujum Unplugged EP referring to the Gothic land north of the Black Sea invaded by the Huns in the 300s CE) while also reflecting on how these battles gave rise to new factions such as the Gothunni (often referred to as the Greuthungi or the Ostrogoths) or those who became Men-at-Arms of the Roman Empire as Foederati and later becoming the Visigoths.

The satisfying rumble of drums and guttural bass of Draugablíkk’s deeply sung, throat-like vocals make EP opener Ride to War an infectious listen, followed seamlessly by Fearless We Stand Tall. Fearless We Stand Tall, at least in its Aujum Unplugged iteration, is more string forward, elevated to a tribal, dance-like ambiance by the Norse talharpa, all the while retaining the grit of its forebear. The pace of these strings is amped up for the EP’s third track, Where the Spirit Wills, turning from ambiance to an urgent gallop, capturing the thundering clashes of long-forgotten warrior cultures of the steppes with more of an Eastern sound.

Draugablíkk succeeds in conjuring the sleeping ghosts of these ancient battles in a captivating release that stands strongly on its own as an evocative neofolk EP whilst inspiring eager anticipation of the upcoming metal cut. Draugablíkk excels in this blend of harsh amplified instrumentation built upon a neofolk skeleton, as adeptly seen on their 2020 album NÍU: Blood of the Amali (Ásaland Metal Cut), so in short, what is bound to be ferocious, already has good bones.

Draugablikk’s Wolves of Hyrkania (Aujum Unplugged) EP is available to stream now on all music platforms courtesy of Legendo music, with the Gothunni Metal Cut due for release June 11. In addition, we have added our favorite Hyrkania tracks to our Spotify playlist Neofolk Next (updated weekly.)

END_OF_DOCUMENT_TOKEN_TO_BE_REPLACED

March 28, 2022 — For many players out there, The Witcher 3: Wild Hunt is the pinnacle of video game RPGs. Based on the applauded literary works of Polish author Andrzej Sapkowski, there are few games in history that can attest to the success of this widely-regarded masterpiece series. With The Witcher 3: Wild Hunt next-gen update looking to come out this summer, this is one super-boosted upgrade you will not want to miss. END_OF_DOCUMENT_TOKEN_TO_BE_REPLACED